for every fashionista over there

The second day of the Amazon India Couture Week was all about contrast. The evening began with Rahul Mishra showcasing Tree of Life, a collection inspired from the centuries-old Chintz textiles that merged international influences with traditional Indian elements.

With bomber jackets and t-shirts combined with sarees and lehangas, designer Rahul Mishra’s collection at the ongoing Amazon India Couture Week displayed a mix of a woman’s strength and feminity. Titled “Tree of Life”, Rahul’s monochromatic line was inspired by the modern multitasking woman, highlighting her strength as well as fragility.
“I am inspired by my wife. The way she multitasks, she is like a boss in office and at home she becomes very caring wife, taking care of each and everything. ”A woman is strong but at the same time she loves her feminity. She’s not shying away from her feminity, she is proud of it. She is soft but she is strong. This duality inspired me a lot,” Rahul told reporters here.
The outfits varied from dresses, skirts, jackets to traditional Indian wear like sarees, anarkali suits and lehangas. The designer revealed the collection has contribution of locals belonging to a small district near Kolkata.
“This collection, in terms of working hours, has been made 90 per cent in the village of India. The villages where sometimes they don’t even receive electricity, they did head worn fabric and embroidery. ”A group of embroiders were working from Dharavi. So we used the process of reverse migration and sent almost 30-40 people back to their village. They were villagers migrated from a village about 300kms away from Kolkata,” he said. The colours were restricted to hues of white, black, blue and gold. Patterns of flowers and leaves adorned the clothes.
The models resembled mannequins, with their hair pulled back neatly combined with minimum make-up. The look was devoid of any accessory bringing the clothes into spotlight and making the collection appear sombre. Fabrics used were Chanderi, wool, metallic yarns, silk, cotton, Benarasi tissues. ”This collection although looks like seamless but it has truckloads variety of all possible natural yarns,” said the designer.

As for Gaurav Gupta, his first words on describing his collection titled Silt and Cipher, were, “Silt is sand and cipher is zero and it is for you to decipher.” Inspired by elements of fantasy that the designer lives in, for Gupta, the collection was an attempt at making pieces that were much more sophisticated than his usual creations.

The collection saw saree gowns and saree lehengas in oil blue, silver, peach, nude and gold. Working a contrast between structure and flow, the embroidery on the pieces was reminiscent of sand washed away on a sea shore. The set gave one the feel of being transported to the woods and the models doused in gold just heightened that other-wordly charm.
Also adding star power to the ramp was actress Kalki Koechlin, whom the designer called his fairy godmother and perfect muse. “She’s playful, mystical and multifaceted and that’s what enchants me,” he said. Looking ethereal in a champagne organza gown, the actress loved her attire. Addressing the media she said, “I feel like a princess. It’s very different from what Gaurav usually makes but it’s really nice to see him go somewhere completely unpredictable. It has a very fairytale, elfin vibe to it and he is very good at using his imagination.”
Jewellery from Outhouse added a fabulous touch to the collection that was a delight for the eyes. 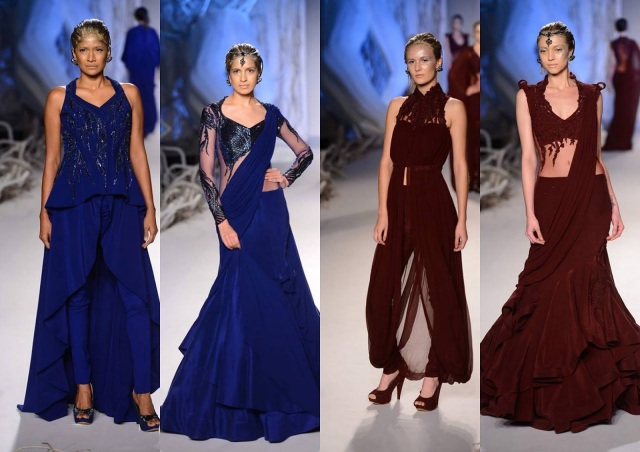